Outdoor living spaces are the top of mind as Spring continues to be sprung. The same goes for gardens, whether you’re starting one, or continuing to care for one. An element that takes in all of these is the greenhouse. So, in celebration of the greenhouse, here’s guest writer (for Build Direct Blog) Amy Moczynski to outline the history and function of greenhouse.

Now that you’ve filed your taxes and the warmer weather is creeping its way into your neighborhood, you might be thinking of home improvements that will make your yard a top-notch outdoor destination. If you spend a lot of time out in your flowerbeds, or are looking to grow more exotic and warm climate plants for the first time, that tax refund might be better spent on a greenhouse.

Early History of the Greenhouse

Greenhouses date back to about 30 A.D. when Roman emperor Tiberius built one of the earliest known greenhouses out of tiny translucent sheets of mica (glass had not yet been invented). The first practical greenhouse was designed by French botanist Jules Charles in 1599 and they gained popularity in the 17th century England. During this time period, greenhouses were seen more as a status symbol than something to use for practical growing purposes. Elite “orangeries” as they were called were constructed as an expansion of the home with a solid roof, glass walls and even a stove for heating. These buildings were status symbols and often used for entertaining.

America’s first recorded greenhouse was built by Andrew Faneuil in 1737. Faneuiil was a wealthy Bostonian merchant who used his greenhouse primarily to grow fruit. The greenhouse gained popularity slowly, and greenhouses were built primarily for the wealthy. George Washington even had a greenhouse at Mt. Vernon so he could grow and serve pineapples to his house guests.

Greenhouses and the Industrial Revolution

By 1825, greenhouses became wildly popular and their style began evolving. Many used furnaces to heat the air and some were built primarily for the wealthy by south-facing windows, a design concept that is still used today. In the 20th and 21st centuries, aluminum, fiberglass, polyethylene and PCP building materials have made greenhouses more cost effective and practical than greenhouses of the past, making them available to more than just elite homeowners.

In addition to the different types of materials used to construct greenhouses, they come in several styles. While most greenhouses are freestanding, there are attached greenhouses that provide gardeners with easy access to water and electricity. The A-frame greenhouse is great for regions that get a lot of snow, but depending on the size of the greenhouse, there can be limited head room and ventilation.

While more decorative than an A-frame greenhouse, the gothic arch greenhouse is more challenging to construct. However, this style of greenhouse is good for regions that receive a lot of precipitation throughout the year as the sloped roof prevents rain or snow from accumulating on the roof. The span roof greenhouse is probably the most widely used greenhouse style and can be considered the most practical. The layout offers room for the gardener, and most varieties are large enough to fit a wheelbarrow, making transporting supplies easier.

A difference in styles isn’t the only thing that can make one greenhouse stand out from the others. Greenhouses can be made from a variety of different materials, including glass and plastics. The frame of the greenhouse can also be constructed from wood, plastic, aluminum or steel, letting homeowners mix and match the materials used to construct their greenhouse. More important than the material used to construct the frame is what a homeowner uses to cover their greenhouse. 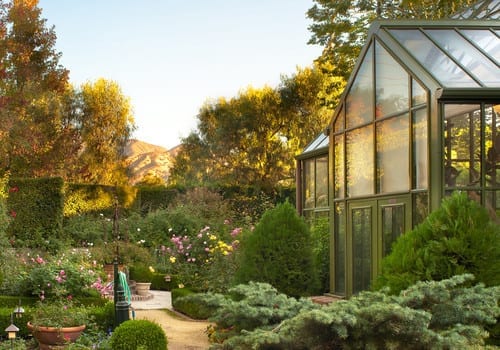 The material used to cover a greenhouse will dictate how much light is allowed in, as well as how much heat can escape. Glass is the traditional covering for a greenhouse, mostly due to its strength and ability to retain heat better than plastic. Clear glass allows plenty of light to enter into the greenhouse, but frosted panels can help break up the light rays to allow the light to more evenly distribute among the plants.

An alternative to glass as a greenhouse covering is plastic, usually either film plastic or rigid plastic. Rigid plastic coverings, which can be fiberglass, acrylic, or polycarbonate, are shatterproof or shatter resistant depending on the type of material chosen. They also retain heat well and allow light to pass through the materials. One advantage over glass is during the warmer months, a rigid plastic greenhouse requires less cooling than a glass greenhouse of the same size.

Film glass coverings offer a tremendous advantage over glass coverings because they are only a fraction of the cost. While they only last typically three to five years, film glass coverings can heat as effectively as glass. Film plastics also offer an additive that lets condensation run down the covering material as opposed to dripping on the plants in the greenhouse, which can help prevent plants from being exposed to contaminated water.

Connected to a Proud Tradition

So when considering new additions for your backyard, think about investing in a greenhouse to connect your home to a long line of luxury and opulence. In addition to creating a shared connection with wealthy and noble figures in history, greenhouses also provide the opportunity to create a great exotic growing environment. They can allow you to grow varieties of plants that aren’t native to your hometown and provide a year-round growing environment. Plus, they can add a look of opulence to your traditional backyard.

(You are reading an article originally posted on Build Direct Blog)