Small spaces, outbuildings and basement bathrooms can be some of the toughest projects on the bathroom remodeling spectrum. With so much happening in so little space, you’ve got to plan a lot in advance. Not only do you have to route plumbing and ventilation, but you have to think about the space you’re building in. Is it a hundred-year-old home with a stone foundation that might be a design wow? Or is it a modern building with a poured-concrete structure? You also have to think about what’s happening on both sides of the door, which affects, well, everything. 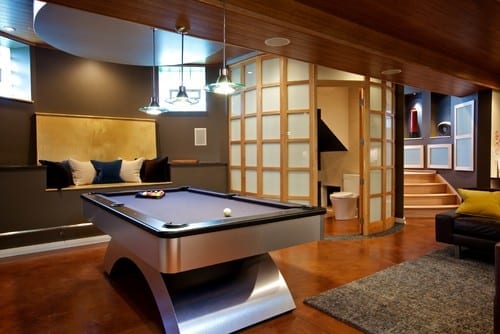 Be bold. The typical strategy for a bathroom in a basement is to hide it, but sometimes there’s just no way to pull that design move off that isn’t boring. The reason: Basement bathrooms need to compete for space with the furnace, water softener, hot-water heater, stairs etc. And sometimes after I lay out the bar, bedroom and whatever else makes the space awesome, there’s no place awesome left for the bathroom.

In that case it’s often best to run hard in the other design direction and celebrate it in plain sight, make the bathroom part of the plan and a piece of the experience. Celebrating “unwanted” things is one of my favorite design tricks. 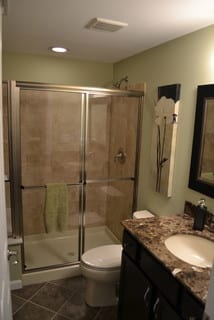 Always vent. One of the most important parts of a bathroom in a basement is a sufficiently powerful ceiling fan to evacuate the moisture — not letting it go into the ceiling or utility room, but outside. Like, where the sky is. Steam is just a little cloud while you’re showering. But after you’ve left, the water falls back to the baseboards and turns back into water. Then it becomes that gross stuff you don’t want to clean.

A vent fan is the way to get the moisture out of the house. I repeat, out of the house. Don’t get me started on how many times I’ve seen bathrooms vented into the attic or another hidden space. Your attic may be hot or cold, but it’s still technically inside. Get that moisture outside with the rest of the clouds! 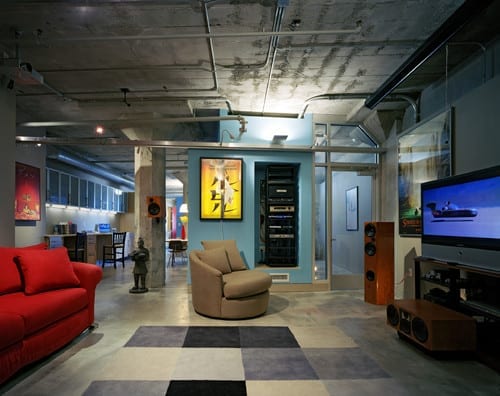 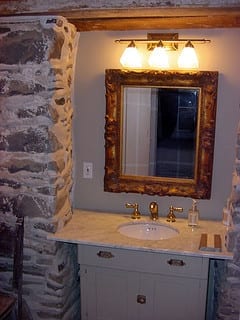 Expose the structure. A basement bathroom offers abundant opportunities to use the existing raw structure of the home. Rubble foundations, for example, are essentially structures. Why cover their powerful looks with drywall?

And consider the plumbing, too. While drain lines and electrical services aren’t all that cool to look at, copper supply lines (water lines) can be gorgeous. If you’ve got an open structure, it’s sometimes easiest — and awesome-est — to make the most of what you’ve got.

Exposing pipes can be a cool way to make a basement space feel industrial or like a man cave. It’s also way easier than building soffits and bulkheads to hide everything. If you’re a building geek like me, it’s best to design a space where you can see the working parts. 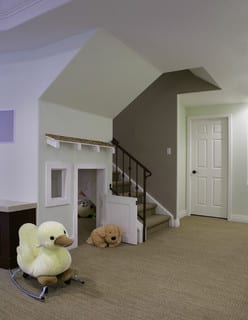 Boost privacy. Many builder-grade houses contain hollow-core doors. These doors have a real-looking wood grain but are made up only of ¼-inch-thick parts, and are essentially cardboard and air inside.

While hollow-core doors can be fine for certain rooms, I try to use solid-core doors for the bathroom to keep the bathroom experience as much of a one-person affair as possible. Solid-core doors deaden the sounds created in the bathroom. So if you’re having a book club meeting or poker night down there, a solid door and insulated wall framing that both deaden sound are nice for everybody. 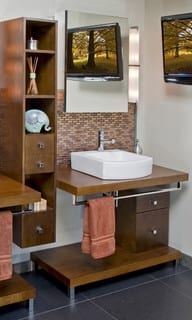 Build up. Small-space remodels can often be harder than big-space overhauls. So much has to happen in such a tiny space, it’s like dancing on the head of a pin.

So when I go into a small space, I’m always thinking about how I can use it smartly, use it vertically and make everything look like it’s supposed to be there. 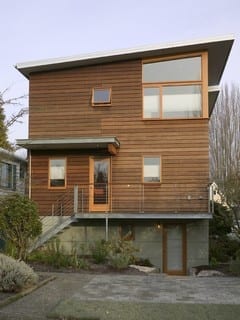 Be one with nature. Basements aren’t always underground. When designing or building a bath, think about the approach from the outside, as well as the windows, egress and view, from inside and outside the john.