From unfolding apartments to clever remodels to creative rentals, these 10 tiny kitchens show that their owners and designers haven’t just learned to deal with small spaces — they’ve embraced them. With solutions including cutting boards on drawers for extra counter space, affordable alternatives to wallpaper and innovative storage, these small kitchens can’t help but inspire. 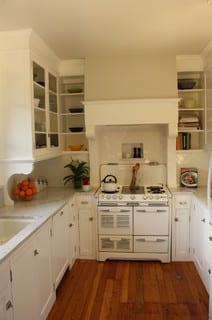 Robert Kelly’s vintage-style kitchen is only about 145 square feet, but he doesn’t need much more space — even with kids and pets around. Kelly’s home was built in the 1920s, and preserving the original style was a big priority. Each appliance and finish was chosen to complement the house as a whole. The beautiful vintage stove was given to him by a friend. 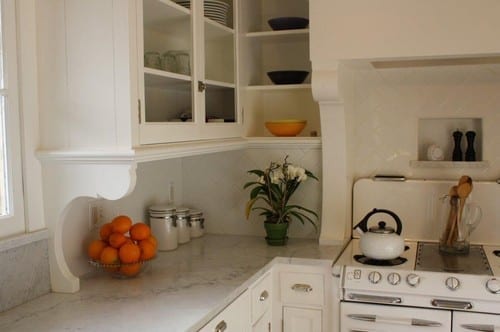 The most difficult part of Kelly’s renovation was planning the kitchen in relation to the rest of the house. The traffic flow had to be arranged with emphasis on one side of the space, leaving more space for cabinets and counters on the other. Relocating the interior stairs, the exterior stairs and the windows helped achieve this but presented some complications. 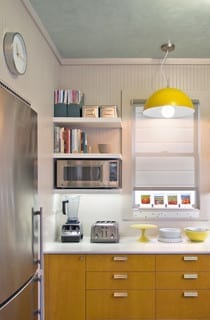 Designer Steve Justrich’s renovated 1912 kitchen was carefully designed to make the most of its 90 square feet. Justrich relied on simple tricks — placing the refrigerator flush to the wall in an old doorway and purchasing small European appliances — to save on space. Open shelving instead of upper cabinetry and a turquoise Venetian plaster ceiling create the illusion of more space. 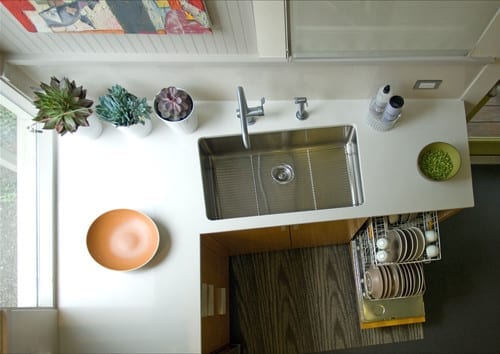 A tiny dishwasher is all Justrich needs for a day’s worth of dishes. A built-in cutting board and a strainer for the sink expand counter and prep space. Colorful artwork and Heath pottery add cheer to the simply designed space. 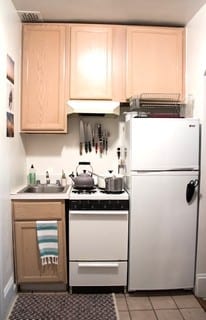 Yossy Arefi-Afshar loves to bake, and refuses to let her tiny New York kitchen stop her. Although she’s learned some hard lessons about planning along the way (“I’ll never forget the time I got too ambitious with my menu and ended up doing dishes in the bathtub the next day,” she says), she’s learned to work with what she’s got. 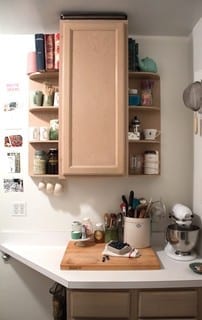 When Arefi-Afshar is working on a big baking project, she simply clears everything off the counters and moves it to another part of the apartment. For some extra surface area, she’ll pull out a drawer or two and place a sheet pan or cutting board on top. 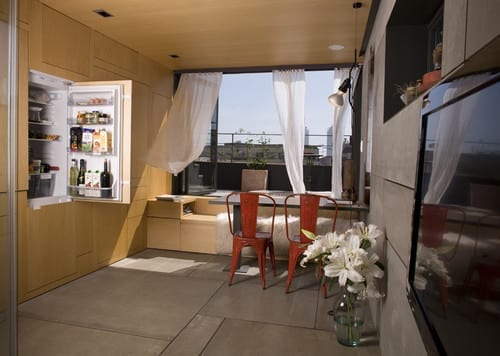 This cleverly designed 260-square-foot Barcelona apartment functions in different modes — each appliance and piece of furniture tucks into a hidden panel. Panels made of Viroc and wood pop open with a simple push, revealing refrigerators, seating and a bed. 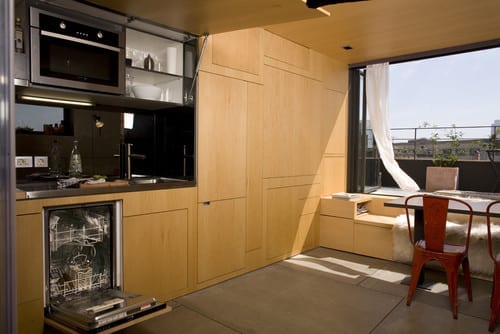 The kitchen panels are all on the same side of the house. A fridge, an electric stovetop, a sink, a freezer, a microwave and a dishwasher all fit into this one wall. After meals, everything simply gets tucked back into its hidden panel. 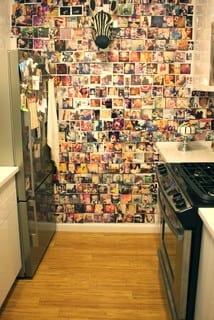 Natalie Holbrook’s new apartment was an upgrade in size and style from her previous tiny, prewar home. While the kitchen was a step up, it was still small and lacked any unique style. When she first moved in, Holbrook wanted to cover this wall in wallpaper, but the potentially messy installation and expensive price tag dissuaded her. 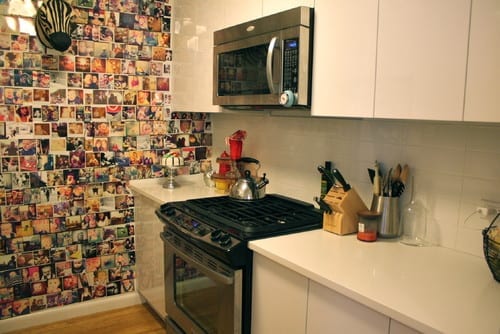 Instead, she came up with an impromptu, stylish and inexpensive collage made of Polaroids, Instagram prints and other photos. Including the tape, the whole thing cost less than $35. 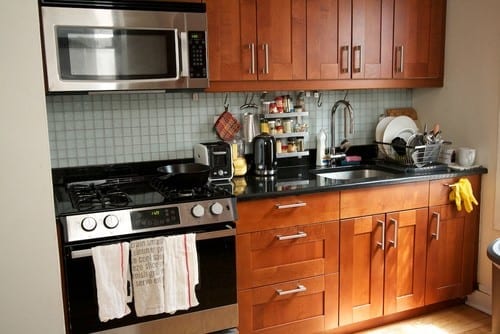 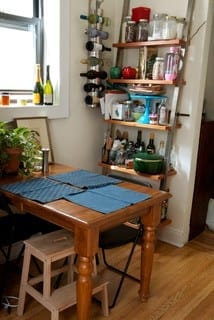 A huge part of keeping a small kitchen tidy is prioritizing belongings. Not everything could fit in her kitchen at first, so the most used items were kept on hand. On the other side of the kitchen, a wall-mounted wine rack and tall bookshelves take advantage of wall space for storage. A small setup seats four people for a casual meal. 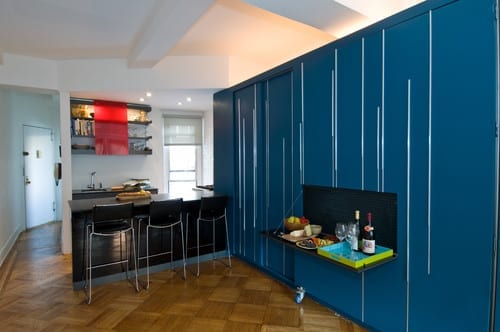 7. Luxe Appliances in a Small Space
Homeowner: A Manhattanite who loves to cook

The owner of this 400-square-foot New York City apartment loves to cook and knew that his lack of square footage didn’t have to be an inhibitor. Together, the client and designers Michael Chen and Kari Anderson came up with a unique “unfolding” concept — a built-in cabinet that holds a closet, a desk and a bed, and divides the apartment into zones. 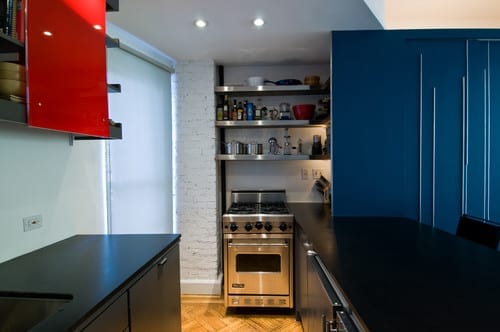 This unfolding cabinet solved the issue in the great room, but the dilapidated kitchen still had some problems. The designers found a tiny Viking range to install at the end of the narrow kitchen space. Two undercounter units replaced a full-size fridge, and walnut and stainless steel open shelving provided functional and attractive storage. 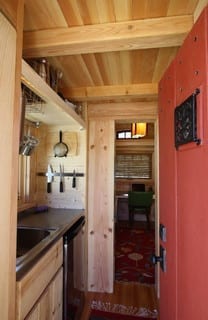 This movable 7- by 16-foot home is combined with an equally tiny home next door for a total of 620 square feet of living space. Jay Shafer, founder of Tumbleweed Tiny House Company, calls this home (along with his wife and young son). This energy efficient and ecofriendly housing solution relies on the basics, including a bare-bones kitchen. The front door of the house opens into its small kitchen and dining space. A sink, a prep surface, a portable electric range and a small fridge serve the family’s basic needs. A shelf above the sink holds most of the dishes and other kitchen essentials. 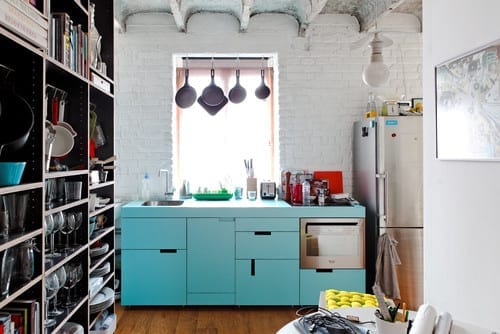 This space-saving customized kitchen is full of smart storage solutions. The bright blue kitchen cabinetry provides plenty of color while taking up minimal space. An electric stove top, an oven set flush into the cabinetry and integrated drawer handles keep things simple. Having the main kitchen unit in a single block saves space and keeps the kitchen open. 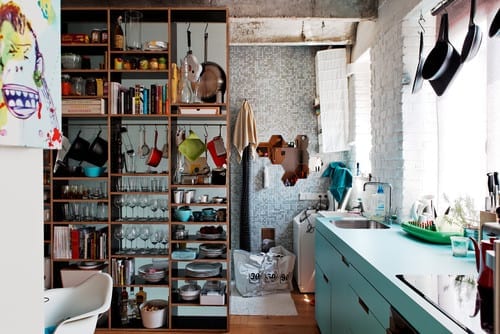 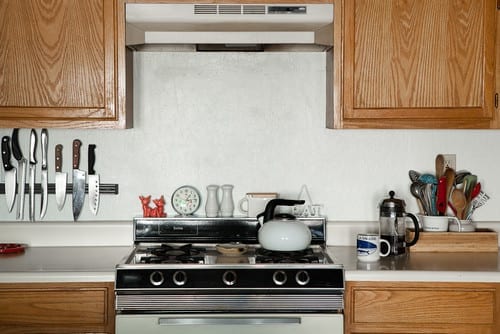 Food photographer Kimberly Hasselbrink loves her San Francisco apartment, but her kitchen is seriously lacking in space and natural light. She hasn’t gotten the go-ahead to make any changes to it, so for now she’s dressed up her space with thrift store accessories and one-of-a-kind art. 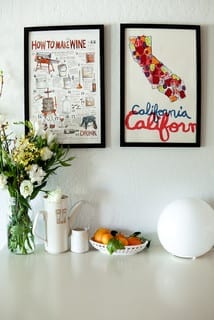 Hasselbrink keeps the space neat and clean by using hidden storage. She doesn’t like to keep anything out unless it’s useful and attractive, instead adding color and visual interest through easy-to-change decor, like these prints fromJon Holcomb and Wendy MacNaughton.